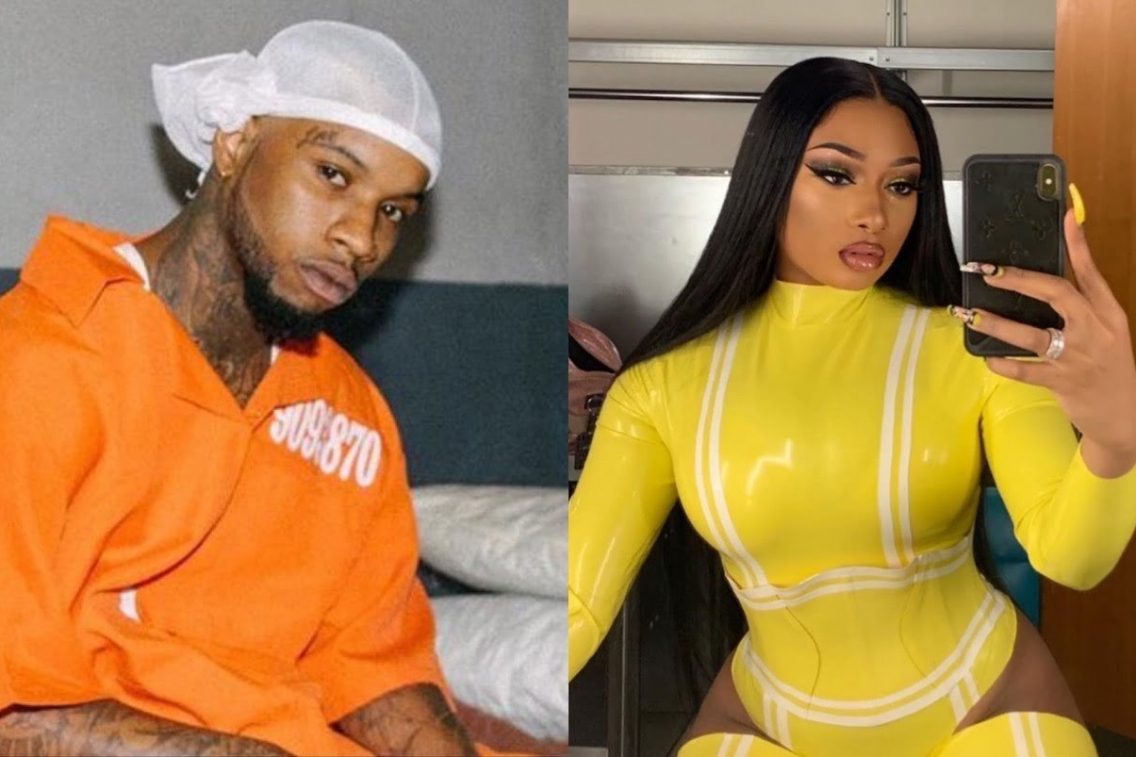 The trial into the shooting of Megan Thee Stallion allegedly by Tory Lanez has started. The testimony is gripping as witnesses paint the picture of what happened on the night the “Wap” rapper was shot.

According to detective Ryan Stogner who is the first witness to take the stand at the preliminary hearing, on the night Megan Pete was shot, Lanez was allegedly “intoxicated” and shouted at Megan to “Dance bitch, dance!” before opening fire on the ground near her feet causing injuries to both feet.

The incident occurred on July 12 after a night of drinking and partying at Kylie Jenner’s house, where a pool party was held. According to the detective, he responded to calls around 4:30 AM in the Hollywood Hills, where he said there was a dispute between the artists.

The detective said that when he arrived, he saw Tory standing on the step board of their SUV while Megan was standing outside of it.

Describing the exchange between Tory Lanez and Megan Thee Stallion, the detective said that she was shot in both feet as she exited the car.

“As she exited the vehicle, she heard Mr. Peterson yelling obscenities at her, and he stated, ‘dance bitch!’ and he then began firing a weapon at her,” he said.

He continued- “[Megan] observed Mr. Peterson holding a firearm, and then she observed him start to shoot. Megan immediately felt pain to her feet, observed blood, fell to the ground, then crawled to an adjacent driveway of a residence…she described her injuries as bleeding profusely,” he said.

Peterson’s lawyer Shawn Holley however, questioned the detective about different story altogether, giving insight into the possible defense of her client who has pleaded not guilty in the charges.

During her questioning of the detective, Holley suggested that Megan had gotten into a physical fight with her former best friend Kelsey Harris while inside the black Cadillac. The source of the altercation, Tory’s lawyer claims- came about after Tory revealed that he and Megan were intimate, which led to Harris becoming jealous and attacking Megan, claiming she “backdoored” her and was also interested in Tory Lanez.

According to Rolling Stone writer Nancy Dillon, Tory’s lawyer then proceeded to cross-examine the detective as she painted a picture of two friends fighting over Tory Lanez, and somehow Megan Thee Stallion got shot in the melee.

Megan Thee Stallion did not say who shot her until about a month after, when she named Lanez as the perpetrator, saying she was trying to protect him from going to jail. Holley’s defense is capitalizing on this discrepancy created by Megan Thee Stallion.

Holley asked the detective: “Did (Pete) tell you at some point that the argument in the car escalated when Tory revealed to Kelsey that he was in an intimate relationship with Megan?” Holley asked.

“I’m not aware of that,” Stogner replied.

Holley: “Do you remember her saying that Tory bringing that up created, in her words, ‘drama’ because Megan knew Kelsey had a romantic interest in Tory?”

Stogner: “There was a reference that Megan was aware that Kelsey had some affection for the defendant.”

Holley: “And do you remember Megan saying to you in your videotaped interview that Kelsey said (in the car) that this wasn’t the first time that Megan had ‘back-doored’ her with a guy?”

According to Rollingstone, the detective agreed that Megan had said in her police statement that “she and Kelsey were arguing.”

Meanwhile, in a twist, detective Holley said when her client [Tory] gave a statement to police, his statement was captured on bodycam footage where he explained that “I was just trying to protect my girl.”

The detective, however, said he did not recall the video.

While Harris has ended her friendship with Megan after the shooting incident, and Megan accused her of taking money from Tory to keep quiet, it seems that the defense is pinning the shooting on her.

Tory’s lawyer suggested that Kelsey may have had possession of the gun. According to her, investigators found gunshot residue on her hand.

However, the detective later re-examined by Deputy District Attorney Kathy Ta said that gunshot residue might be easily transferred to someone’s hands simply by them being “in the vicinity” of a firearm discharge.

The detective said in his re-examination that Tory called Harris while she was with Megan at the hospital following the incident.

“On the phone call between the defendant at Kelsey, at any point did Kelsey make any statement about having assaulted or shooting Megan?” Ta asked.

The Deputy DA then suggested that Tory’s call to Harris was him “apologizing” during the call to which the detective agreed.

Tory Lanez, who was previously quiet at this point, interrupted the questioning.

“You tell me what I was apologizing for. That doesn’t make no sense,” Peterson blurted out, arms raised in frustration.

Detective Stogner went on to say that “Megan stated the defendant apologized for doing it and offered her money and begged her to please not say anything and made a reference to the fact he was already on probation and he begged her not to say anything.”

Meanwhile, the purpose of the preliminary hearing is to determine whether there is a triable issue and whether the case was strong enough to go to trial. Following Stogner’s testimony, president judge Keith Borjon ruled that the Canadian rapper should stand trial for felony charges – using a concealed semiautomatic weapon to shoot and injure Megan.

Kelsey Nicole, real name Kelsey Harris, who has been quiet since last year following the incident, seemed to be following the case as she hopped in the theshaderoom to share her denials.

In response to the suggestion by Shawn Holley that she and Megan were fighting which then escalated, she said, “this is ALL cap smh.’

When asked about why she was silent on the matter and whether she had signed an NDA when she took money from Lanez to keep quiet, the entrepreneur said – “I’m not worried about n NDA, this is real life S*T. NDA ain’t stopping anyone. Trust me my time to speak is coming, let’s see them get all their stories out. I’m the one with nothing to hide or lie about. Difference between me and them. Celebrities will do and say whatever to save face.”