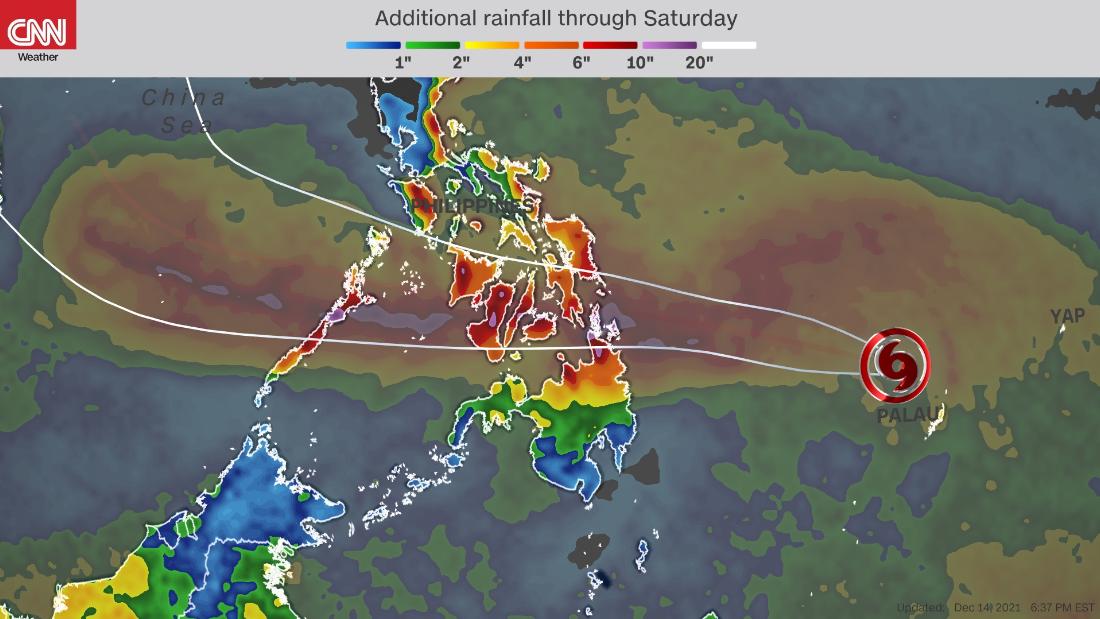 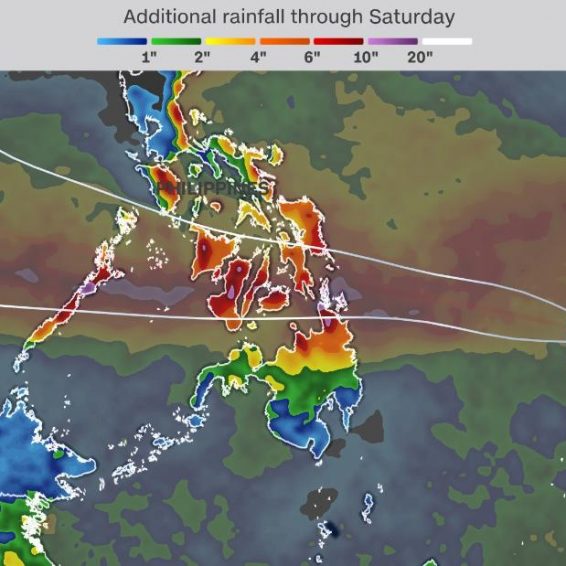 1 month ago·2 min read
ShareTweetPinShare
Home
World News
Strengthening Tropical Storm Rai to hit the Philippines as a typhoon Thursday
The content originally appeared on: CNN
Rai currently has sustained winds of 110 kph (70 mph), putting it just shy of typhoon strength (119 kph or 74 mph).
Favorable conditions across the region, including very warm ocean waters and low wind shear, will likely lead to steady strengthening up to landfall.
The current forecast from the Joint Typhoon Warning Center is for Rai to peak reach 165 kph (105 mph) at landfall. This would make Rai equivalent to a Category 2 hurricane on the Saffir-Simpson Hurricane Wind Scale.
In the Philippines the storm is known as Odette and is being monitored locally by The Philippine Atmospheric, Geophysical and Astronomical Services Administration (PAGASA).
Read More
The outer bands of the storm will spread rain into the southern and central regions of the country Wednesday, according to PAGASA.
Thursday morning through Friday morning, the rains are expected to be “heavy to intense and at times torrential,” PAGASA said in its forecast bulletin early Wednesday morning.
More than 250 mm (10 inches) of rain will fall across portions of Mindanao and the Visayas. The intense rain is expected to cause widespread flooding, flash flooding, and landslides in higher terrain.
PAGASA has already issued Tropical Cyclone Warning Signal 1 for high winds along the coast within the next 36 hours. The agency says it will likely raise the warnings to Signal 2 on Wednesday and Signal 3 on Thursday as typhoon-strength winds move onshore.
Wednesday is a day for preparations to occur ahead of the primary impacts. Conditions across the region are expected to steadily deteriorate Thursday, with the storm ultimately making landfall Thursday afternoon or evening local time (early Thursday morning ET).
In addition to the strong winds, flooding and landslides, coastal regions will be on alert for two to three meters of storms surge and shipping vessels will face extremely rough seas over the next several days.

December storms are not uncommon

In the West Pacific there is no defined “season” for tropical systems as there are in other basins like the North Atlantic (June 1 to November 30). While activity peaks in the late summer to early autumn, storms can occur in any month of the year.
The Philippines is no stranger to catastrophic storms in December. In the last decade, numerous intense and deadly storms have impacted the region.
In 2011, Tropical Storm Washi killed well over 1,000 people in the southern Philippines and never made it to typhoon status. The storm was comparatively weak, but dumped massive amounts of rainfall, leading to devastating flash flooding and landslides during the overnight hours while people were sleeping.
Just a year later, in December 2012, Bopha also hit the southern Philippines region of Mindanao. Bopha was much stronger than Washi, hitting the region as a super typhoon, and also killed more than 1,000 people.
The Philippines were also struck by strong and deadly typhoons in December 2014 (Hagupit) and 2016, when Typhoon Nockten struck on Christmas Day.