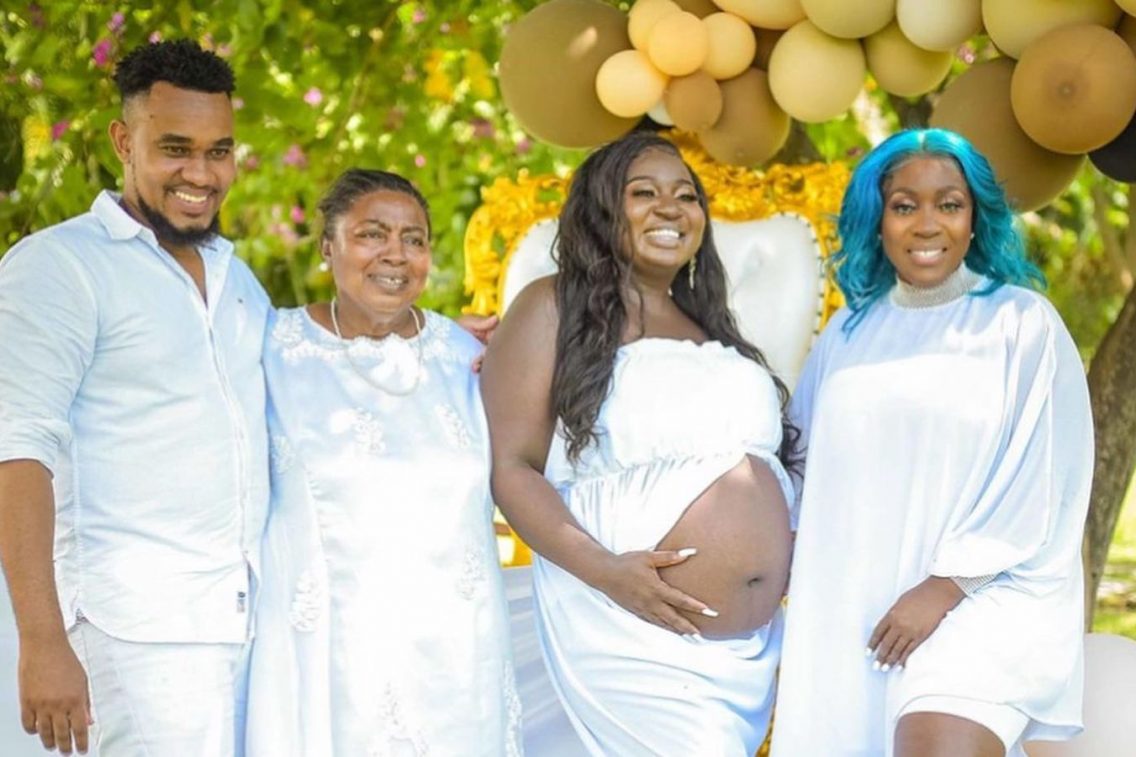 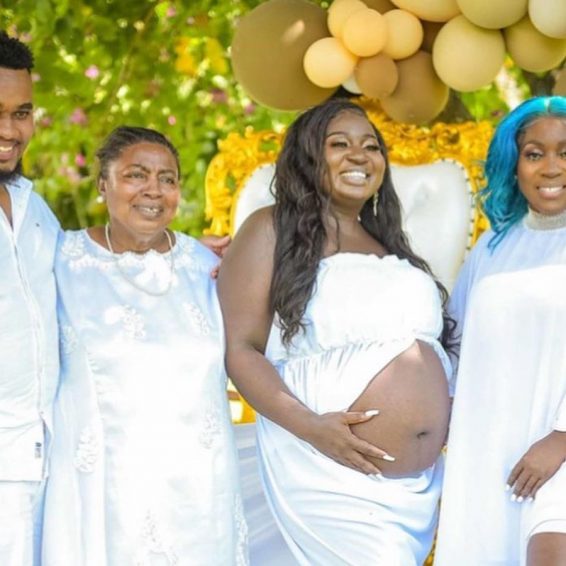 Spice shares her sister’s maternity pics after surprising her with a baby shower and gender reveal party.

What Fenise Hamilton thought would be a simple pregnancy photoshoot turned out to be much more as Spice made a grand entrance at her little sister’s surprise baby shower held at Hope Gardens. Though she had previously stated that when she wore her blue wig, she was in her Spice persona versus her black wig as Grace Hamilton, Spice donned her blue wig and an all-white ensemble for her sister’s big day. Both women received an outpouring of love and support from their family and close friends.

Taking to Instagram, Spice shared the beautiful event with her fans as she explained to them that she had tricked her sister into thinking that she would be missing her maternity photoshoot as she could not book a flight in time. Spice then secretly planned a baby shower and gender reveal and showed up and out for her little sister.

“My little sister @fenisehamilton is expecting her first child with @dre_elli_richforever and I told her I was extremely busy and couldn’t make it to Jamaica. She had a photoshoot in the garden and I secretly rented out another section same place and planned a baby shower and gender reveal for her and this is what happened when she saw me. Thanks JANEL and RUTHAN for helping me to pull this off who’s guessing what baby we’re having?” wrote Spice in her caption.

Modeling a white strapless dress that was free-flowing and ethereal in design, her sister was shocked to see her appear from behind the curtains, and those gathered quickly grabbed their phones to capture the tender moment between siblings. Fenise, who was delighted at her sister’s appearance, became overwhelmed with emotion and hugged Spice tightly. Her tears prompted the “So Me Like It” artiste to also shed a few tears and exclaim, “Look how you mek me a cry. Me sey you so hard fi surprise cuz you just a call down me phone. Me sey she just a call me so! Surprrrriiiiseee!”

Spice has always been generous with those she loves as she posts regularly about the shopping sprees she sends her mother on and even asks fans to rate the outfits. In January 2020, she surprised her sister with a brand new Honda SUV after initially pranking her into believing that her birthday gift would be a bundle of hair. As friends warned Fenise that she was ruining her make-up, Spice started patting her sister’s face, and the two got themselves composed enough to take photos of the memorable event.

Fans were delighted to see the “Tables Turn” artiste in such a great mood despite her recent battles, and they showered her with praise for pulling off yet another thoughtful act. One fan chimed, “Awww. That’s why you are so blessed Spice. You bless others and God double and triple your portions every time,” while another commented, “Spice I always have to give you the respect…blessings to you both and safe delivery to her.”

Now regarded as the hottest female dancehall act out of the island, Spice is recognized internationally as the face of the genre and the present queen of the dancehall, having produced a career close to two decades old. With the hit “Fight over Man,” she established herself as a bonafide artiste. Her collaboration with Vybz Kartel on “Ramping Shop” skyrocketed her into the musical stratosphere. She entered another phase of her career after becoming a cast member on the VH1 reality show ‘Love & Hip Hop: Atlanta’ in season seven after having a recurring role on season six. Spice now resides in Atlanta with her two children and current love interest Justin Budd. The dancehall artiste remains booked and busy. Her FLOW Christmas promotion commercials are already up and running as she is one of the brand ambassadors for the telecommunication giant.