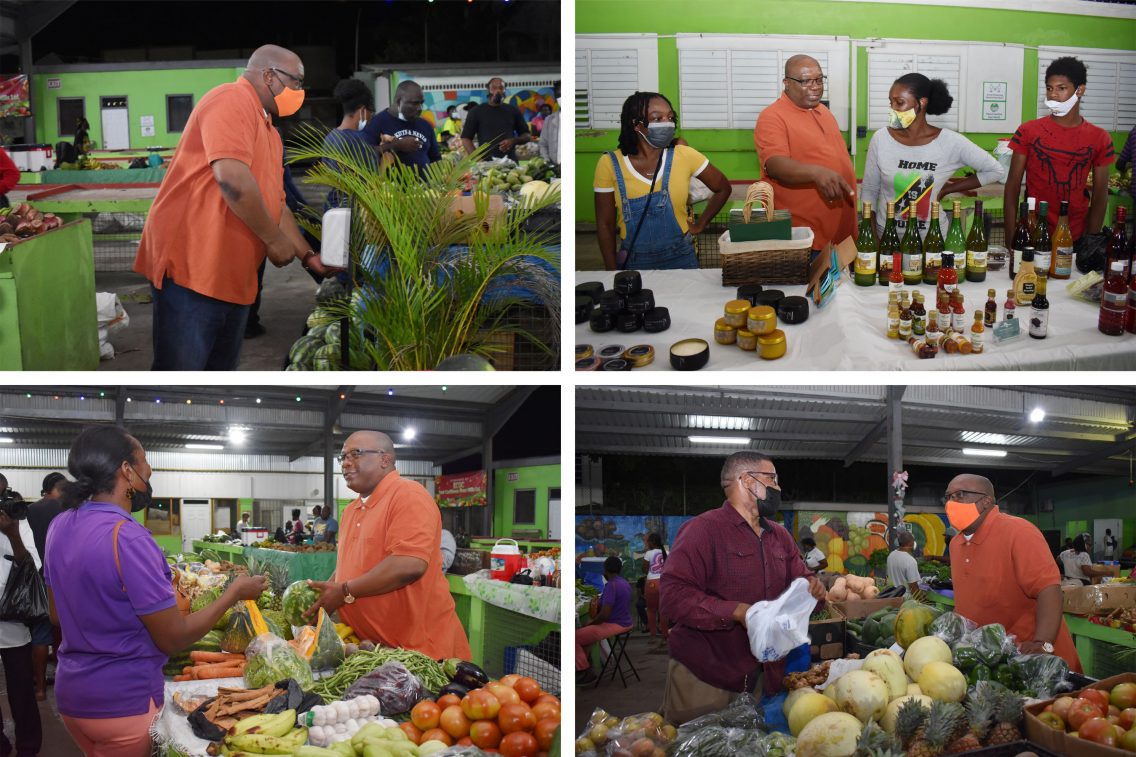 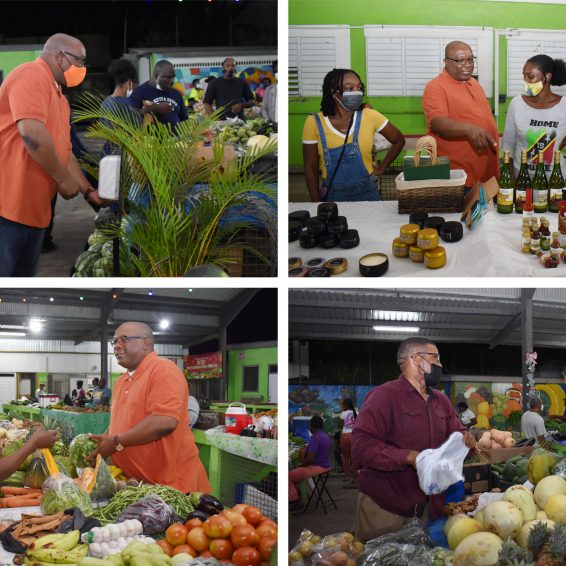 BASSETERRE, ST. KITTS, December 23, 2021 (MMS-SKN) — The first anniversary of Agri-Christmas Night Market at the Basseterre Public Market on Wednesday, December 22 was a runaway success in terms of patronage, with Prime Minister Dr the Hon Timothy Harris spending nearly one and a half hours patronising the various stalls, leaving the market at 10:10 p.m.

Vendors at the market were elated when Prime Minister Harris toured the various stalls, for not only talking with them and posing for pictures with them but felt honoured when he picked items from their display and bought them. Many of them called out his name for attention.

Hosted by the Ministry of Agriculture, Fisheries, and Marine Resources, the event attracted a high number of vendors in comparison with the attendance last year, and there was an equally higher number of patrons who also included the Governor-General His Excellency Sir Tapley Seaton.

Prime Minister Harris who had earlier attended the Royal St. Christopher and Nevis Police Force graduation ceremony of Course #45 held at the St. Kitts Marriott Resort, was met on arrival at the market by the Minister of Agriculture, Fisheries, and Marine Resources the Hon Alexis Jeffers, and the Permanent Secretary Mr. Ron Dublin-Collins at about 8:45 p.m.

“I want to say tonight I was pleasantly surprised and happy in fact by the wide array of agricultural products that are here,” said Prime Minister Harris. “Apart from the fresh produce we also had an interesting variety of agri-processed products. We had wines and rums, and other beverages, we also had candles, all of them being made right here in St. Kitts and it is something that we want to encourage.”

It was the view of his Team Unity Government, he said, that the country needs to produce more regular adequate supplies of vegetables year-round, here looking at the growing of fruits, vegetables and tubers, and other food items which are critical to healthy living.

He added that he was pleased that this December the country is having a good variety of such products, and was also pleased to learn from the vendors that sales during the course of the night market were very good and that there was a high level of satisfaction regarding the turnout and the patronage that they would have received.

“If we are to encourage our vendors, and our farmers into agriculture and agri-processing we have to ensure that they can earn a livelihood,” pointed out Dr. Harris. “I think the turnout tonight, the hundreds of people who passed through and did a brisk trade, certainly turned out to be a source of encouragement to those who are involved and I am certain we are going to see more people.”

According to the Prime Minister, the evening from all appearances was a tremendous success. He said he got that feeling from his own observation, as someone who has always frequented the market and interacted with the vendors and done business with them in the past.

“From my conversations with them, they were very satisfied and I want to encourage the Ministry of Agriculture to continue this kind of innovation such as the night market and the fairs, which allow an additional boost to those who are involved in vending agricultural produce and agri-processed products in St. Kitts and Nevis,” he added.

In the period that he spent at the market, he observed that there was liveliness, a sense of togetherness, and there was a good feeling of Christmas. From his vantage point, it was all good news, which he noted is a wonderful story that is being told about the country’s independent people who have taken to earn a living through the sweat of their brow, and being able to vend and to earn an honest living.

He gave his commendation to young farmers noting that the agricultural landscape looks more youthful than it was ten-fifteen years ago, and stressing that it was something to be encouraged.

Dr. Harris observed that he was equally delighted that persons of all walks of life are now coming into the market. He noted: “This is one of the benefits, if one could put it that way, we have had from Covid. We have been able to create a single space in which all vending of agricultural produce and agri-processed products is being conducted in a safer way, where the protocols can be better observed and the adherence be insisted upon.”

In conclusion, the Honourable Prime Minister said: “The Agricultural Department led by Mr. Ron Dublin-Collins at the level of the Permanent Secretary, and the Hon Alexis Jeffers who is the Minister of Agriculture, Fisheries and Marine Resources, really have done me proud, and done the country proud and I hope that things will grow from strength to strength.”