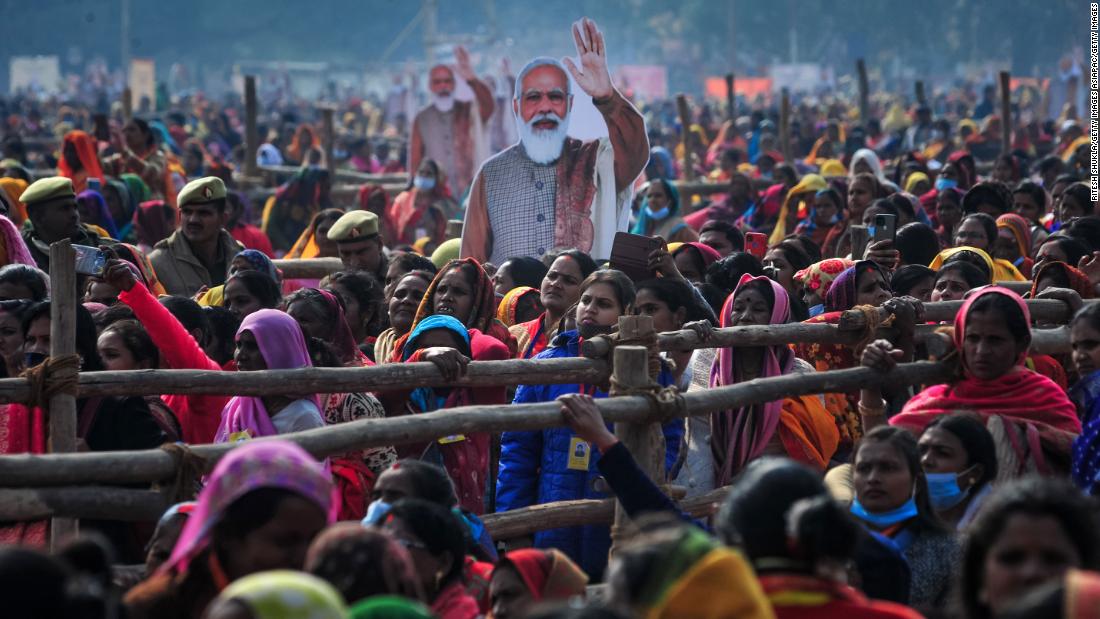 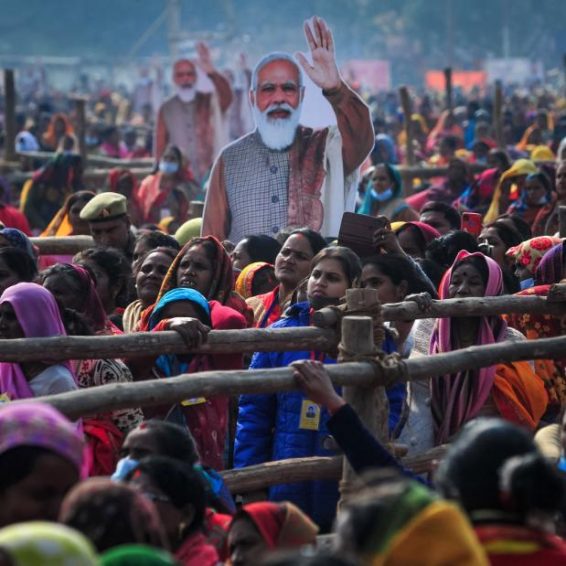 As Omicron spreads in India, mass gatherings spark fears of another wave

New Delhi (CNN)Doctors in India are bracing for a potential third wave driven by the highly contagious Omicron variant, as cases rise and political leaders hold mass gatherings ahead of key elections.

In the past week, India’s Omicron case numbers have more than tripled, with 781 infections now recorded, compared to 236 last Tuesday.
It may not seem that many in a nation of 1.3 billion people, but the variant’s rapid spread in other countries — several of which are now seeing dramatic surges — is enough to make health experts nervous. And the real number of Omicron cases is likely higher than official figures due to insufficient testing.
“If India observes the same pattern as the United Kingdom, and if we compare the population of both countries, 80,000 daily cases in the UK would mean around 1.4 million daily Covid cases in India,” said VK Paul, head of the country’s Covid Task Force, at a news conference on December 17.
For the past month,India has been steadily reporting 6,000 to 9,000 total Covid cases a day — but several of the country’s biggest cities have seen infections spike in recent weeks.
Read More
The financial hub Mumbai, which had been reporting 600 to 800 new daily cases in previous weeks, recorded 2,510 cases on Wednesday. New Delhi, the national capital, also saw more than 900 cases Wednesday — a sharp increase from the start of the month, when daily new cases had hovered in the dozens.
The federal Health Ministry warned last week of “initial signs of a surge in cases of Covid-19,” with researchers at the Indian Institute of Technology projecting a third wave could peak between late winter and early spring.
Prime Minister Narendra Modi could have prevented India’s devastating Covid-19 crisis, critics say. He didn’t
The situation might sound familiar. In some ways, it echoes the past spring, right before the country was ravaged by a second coronavirus wave from March through June. The surge completely overwhelmed India’s health care system, with no beds, oxygen supplies, or medicine left. Across the country, patients were turned away by overflowing hospitals and left dying on the streets.
The second wave was also preceded by a state election that saw large political rallies even as cases rose and doctors’ warnings went unheeded. Now, experts fear India may be on the cusp of a third wave.
So far, data from other countries suggests Omicron may cause milder disease than previous variants, especially among fully vaccinated individuals, and several doctors told CNN they expect a lower hospitalization rate with Omicron. But the strain’s higher transmissibility and India’s sheer population size means it could still see a high number of infections, even if it’s less lethal.
India has vaccinated some 577 million people — about 42.2% of the population, according to data from Johns Hopkins University.
And from early January, India will start vaccinating children ages 15 to 18, as well as distributing booster shots for priority groups such as health care workers and the elderly.
In India the risk of the virus spreading rapidly is compounded by the fact that many people have stopped wearing face masks, are getting tested less frequently than before, and are congregating in large numbers.
The variant holds a high number of mutations, which makes it hard to predict, said Om Srivastava, an infectious diseases and immunology expert based in Mumbai. Though “there is a potential it will be mild and pass off … all you need is any of these mutations to turn nasty,” he said. “Nobody knows what’s going to be happening if it does turn nasty.”
A health worker prepares a dose of the Covishield vaccine in Mumbai, India, on December 22.
It’s unclear how many of the new cases emerging are of which variant because a specific test is needed to detect Omicron’s spike protein, which isn’t commonly used and has more complex steps for “genomic fingerprinting,” he added. “But the (overall) numbers are climbing.”
In the past few months, India had largely lifted restrictions on gatherings, travel and public spaces as infections fell. But last week, the central government recommended states implement containment measures such as night curfews to combat “increased detection” of Omicron, and reopen the Covid “war rooms” that were set up during the second wave.
Shortly after the advisory, a number of major cities announced new restrictions. In the union territory of Delhi, which encompasses the national capital, New Delhi, all social, cultural, political and festival gatherings were banned until further notice. Bars and restaurants were capped at 50% capacity, with face masks required for entry, while gyms and pools will be shut entirely. A night curfew was announced on Tuesday.
Mumbai also capped all social, religious and political gatherings — including weddings and professional functions — at 50% indoors and 25% outdoors until further notice.
All mass gatherings in the state of Karnataka have been completely banned until January 2. In Haryana state, only fully vaccinated people will be allowed into public spaces like markets, bars, restaurants, cinemas and bus stations, from January 1. And Uttar Pradesh, the country’s most populous state, has imposed a nighttime curfew.
Some health experts and authorities fear these precautions won’t be enough. “At this time we are not following social distancing, so I have to say that it is the right kind of setting for Omicron to become ghastly,” Srivastava said.

As five Indian states gear up for elections in early 2022, political parties — including Indian Prime Minister Narendra Modi’s Bharatiya Janata Party (BJP) — have held a number of events drawing large crowds, particularly in the battleground state of Uttar Pradesh.
Though Modi has not yet started campaigning with election rallies, he has been traveling extensively through the election states for various policy announcements and inaugurations; in the past month alone, he has made seven visits to Uttar Pradesh.
Last Thursday, he spoke before hundreds of thousands of people to announce development projects in his Uttar Pradesh constituency of Varanasi. Videos from the event show throngs of unmasked supporters pressed close together.
Modi, too, was unmasked as he spoke, despite having made numerous personal appeals to the public to wear face masks throughout the pandemic.
India’s Prime Minister Narendra Modi attends an event in Allahabad, Uttar Pradesh, on December 21.
The Prime Minister has another visit to Uttar Pradesh and Himachal Pradesh planned for this week, and has also been to Goa and Uttarakhand this month — all headed for state elections next year.
Ram Singh, a laborer in Uttar Pradesh, said only people in New Delhi still wore masks, while residents go without in nearby northern states such as Haryana and Punjab. “I don’t wear a mask very often as it’s uncomfortable,” he added.
Also last Thursday, a high court judge in Uttar Pradesh urged Modi to ban rallies, arguing social distancing was just not possible given the huge crowds, or to even postpone the election. “If this is not stopped within time then the result will be worse than the second wave,” he warned.
Soon after, Uttar Pradesh announced a night curfew to contain rising Covid numbers — but did not mention any restriction on gatherings.

Earlier this year, Modi and his administration faced severe criticism and public anger for their handling of the second wave. Some high-ranking ministers had downplayed the severity of the situation even as cases grew, and Modi had stayed largely silent, attending and promoting political rallies, until the crisis became clear.
Modi acknowledged the Omicron threat last week, and asked officials at a high-level meeting on Thursday to make sure the country’s health infrastructure could deal with any emerging challenges.
In an address to the nation on Saturday, the Prime Minister warned Indians to exercise precautions but not to panic as the new variant spreads.
However, he also expressed confidence in India’s ability to deal with another spike. The country has 1.8 million isolation beds, half a million oxygen-supported beds, and 90,000 beds just for children, he said on Saturday.
A Covid-19 isolation center in New Delhi, India, on December 17, set up as a precautionary measure as the Omicron variant spreads across the country.
Arvind Kejriwal, chief minister of Delhi, echoed Modi’s reassurances. During the second wave, Delhi was recording up to 27,000 new cases a day — but now, the territory is “prepared to deal with even 100,000 cases per day,” he said last week.
But thousands of resident doctors across the country have been on strike since December 17, protesting a delay in allocating hospitals to doctors who have passed their post-graduate exams — leaving them unemployed and unable to support the country’s Covid efforts.
“In the view of the impending third wave … if this (postgraduate) counseling is not held, with the limited manpower it will be too difficult to handle the third wave in the country,” said the Indian Medical Association (IMA), one of India’s largest network of doctors, on December 23. The delay has resulted in a “shortage of 45,000 doctors on the frontline,” it added.
And the supplies boasted by Modi and Kejriwal are largely focused on response capacity — while experts warn the country needs far more stringent prevention measures to avoid an outbreak in the first place.
“Any contributor who creates overcrowding would be a major contributor in (rising cases), said Dhiren Gupta, a senior pediatrician in Delhi, on Friday, adding that political rallies could become “a super spreader event.”
“There is no doubt we should postpone election rallies for at least two months,” he said. “Prevention is the best cure for India.”